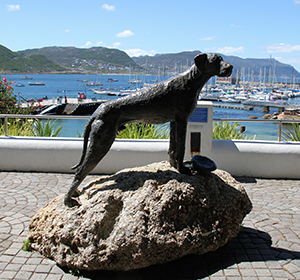 Because of its important location near the meeting place of two oceans – the Atlantic and the Indian – Simon’s Town has played an important role in maritime strategy. The village was given its name in 1687 by Simon van der Stel, the first governor of the Cape Colony, but really began to boom with the establishment of the Royal Navy Base in 1806. Simon’s Town continues to be South Africa’s main naval base.

Simon’s Town’s Historic Mile, from the railway station in St. George’s Street to the East Dockyard Gates, is full of character and maritime history. Its steep and cobbled streets dotted with stone and Victorian cottages and churches are fun and interesting to explore.

There are four worthwhile museums in Simon’s Town — Simon’s Town Museum, Warrior Toy Museum, The South African Naval Museum, and The Heritage Museum – and one of the village’s most popular sites is the famous statue of Just Nuisance, the only dog ever to be officially enlisted in the Royal Navy.

Just Nuisance was a Great Dane enlisted by the Royal Navy, who played an important role in boosting troop morale during the World War II. He was buried in Simon’s Town with full naval honours, and memorialised with a statue that stands in Jubilee Square, and continues to be a popular tourist attraction.

Many heritage buildings are located in Simon’s Town, which has an architectural style that is clearly British-influenced. Its main road, which has no less than five names, features many historic buildings, and its side streets are loaded with Victorian gems.